I have bemoaned the fact that we haven’t had a winter in Grey Britain 2011/2012.  November and December were very warm compared to average and so was most of January.  Despite the lack of interesting weather, at the end of the morning of Saturday 28 January I finished decorating the basement room and, needing to get out for some air and to stretch my legs, I walked for 2 hours up the ridge from Pontypool towards Abergavenny and dropped down to the Goose and Cuckoo Inn to treat myself to a bar snack to celebrate.  Very enjoyable walk despite the greyness. 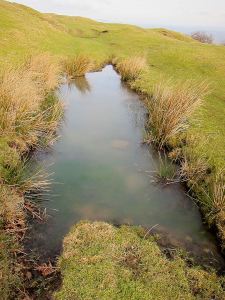 Part of the ridge-top path wrecked by illegal off-road motor bikes is now a permanent pond.

Then on Monday 30 January things changed.  The massive high pressure centred over Siberia spread Westwards and began affecting the UK.  In South East Wales it turned a lot colder, overnight temperatures dropped significantly below freezing for the first time this winter and there were the first flurries of snow. 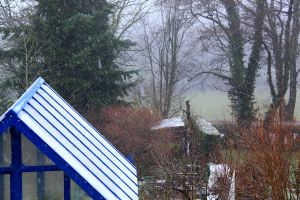 View from the balcony as it starts snowing.

With the decorating behind me, a more significant dump of snow and cloudless skies it was time to go out and play up the mountain.  So on Wednesday I went up Mynydd Garn Wen, the 425 metre (1,400 feet)mountain towards the southern tip of the Brecon Beacons National Park and on Thursday  I walked the length of the ridge to the 555 metre (1,800 feet)high Blorenge mountain and dropped down the steep North face into Abergavenny.  On the entire ridge-top the ground was frozen hard and there was a fair amount of snow even in the sunshine.  The strong wind blew the snow into drifts in places over a metre high, stripping it off exposed parts covered in a thin sheet of smooth ice.  This was a taste of real winter.  Two good walks.  Fabulous!!

The first target point on the ridge, the Folly Tower, looking South over the Bristol Channel

Waves of snow blown by the strong wind

Looking East to the green of the Vale of Usk 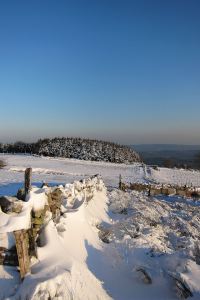 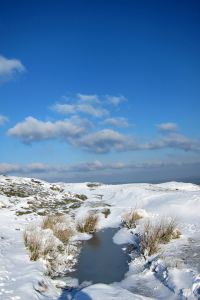 Looking North to the Blorenge, The Sugar Loaf and the ridge stretching on to Hay Bluff

Tall man in the snow

Playing on the top of the Blorenge, a group of about 15 primary school kids brought for a day out from Nofe Landan. Fabulous!!!

With a forecast further dump of snow on Saturday turning to rain and rising temperatures overnight I had to go out and play yet again, one last time.  So I walked back up the ridge, this time covered in cloud and driving snow.  Wonderful!!  I treated myself to soup and a roll in the Goose and Cuckoo and then instead of walking down to the village on the main road and catching the bus back home as I had intended, I decided to walk back because it was still snowing heavily.  I made it off the mountain just as it was getting dark.  Great!!

Part of the walk back is up through woodland, the path lined with ancient beech trees

After walks like that it’s good to come home and toast my feet and some crumpets in front of a log fire.  Not as good as winter in the Rockies but still pretty good.

It doesn't take long to get a good fire going

The forecast rain and thaw set in overnight on Saturday leaving an icy slushy mess on Sunday morning.  It took me half an hour to get the car out of the street to go to church in the morning but by the time I got back it had cleared in the warming sun.  Winter had ended.

But I clung to a shred of hope that up on the ridge top it would still be cold enough to have kept a vestige of winter, after all it would be at least 2oC colder as air cools at about that amount for every 300 metres height gain.  Despite vestiges of ice on frozen water flowing over rocks close to the top of a narrow gully completely out of the sun the section of ridge path I walked up to was wall to wall mud.  Depressing.

.... but the ridge path from The Folly to The Grotto was wall-to-wall mud.

I had I a few days of great walking while it lasted but Winter had indeed come to an end.  My guess is that we may have a few more night-frosts.  I live in hope.

This entry was posted in Grey Britain, Winter. Bookmark the permalink.

1 Response to Grey Britain: a short pictorial history of winter 2012