Coping with Christmas: a season of neon lights and frustration

Christmas is not my favourite time of year, particularly now I have to deal with the whole card and presents stuff on my own.  But I try.  Admittedly I defer doing things as long as I can but then I finally grit my teeth and take a positive if somewhat reluctant step.   If it doesn’t work out first time it often gets deferred.  Had a shot at buying cards and gave up.

On Thursday I met some friends in Cardiff and had a bit of a mooch around the shops for a couple of things I wanted but with no spark of enthusiasm for present-shopping.  Instead I killed some time by wandering around the city centre with the camera, a tourist in an alien world.  It was very colourful.  Very neon.  Not my world. 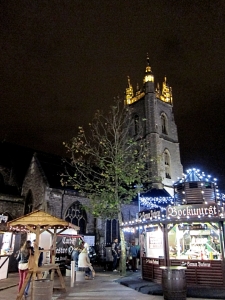 The folksy market and craft stalls around the city centre church

Lights along the castle walls 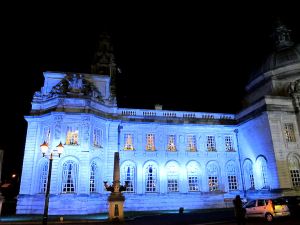 City Hall all it up. 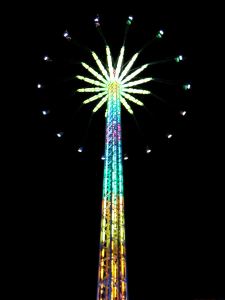 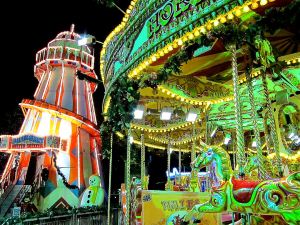 All the glitz of roundabouts and helter-skelter 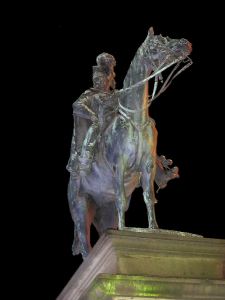 An older gentleman looking on in bemusement

I have never been any good at knowing what to buy as presents for children and so look to parents for inspiration.  A week or so ago it was suggested that waterproofs would be very welcome for the grandchildren  so when on Friday evening I received an e-mail from a major outdoor gear chain reminding me of the offer of 20% off everything in store, ending on Sunday, that made my mind up.  Too good an opportunity to miss.  Focus replaced dither.  Galvanised into action I quickly formed what I smugly thought was an elegant and efficient plan of action.

I would go down to Cardiff on the bus, visit the outdoor gear store in an out-of-town shopping centre and then continue to the city centre to collect something there. I was very up-beat.  This was going to be good. I could sort out nearly all my presents in this one trip.  In and out like a snatch squad.  Real blokes’ shopping.  I reckoned I could be home and finished by 16.30.  I haven’t been as galvanised as this about Christmas shopping for a long time.  Not since before I retired in fact when every year I would go down to Cardiff after work on the last Thursday before Christmas knowing that I had two hours of late-night shopping to complete everything.

Unfortunately, this turned out to be a disaster of epic proportions.

My elegant plan and positive mental attitude took a first knock when the bus pulled over onto the hard shoulder on the M4.  The driver had been taken ill and couldn’t continue.  We then all sat there until a relief bus could be sent out to pick us up and take us the rest of the way.  Timetable already set back significantly.

But that was just the beginning.  The plan unravelled completely.  The saga would drag on for more than 24 hours. I quickly found that in order to receive the 20% discount I needed to have printed out a coupon from the e-mail.  I hadn’t read that far.  I had only scanned the headline not the small print.  They couldn’t help me.  No point in staying.  I was mad at myself and at the inflexibility of the system.

I left and caught a bus into Cardiff centre, and by shooting around at very high speed, an infuriated, truculent man on a mission, I collected my package and was on the bus home at 15.15.

Relaxing a little on the bus I decided to go back to the outdoor gear store early evening in the car having first printed out the coupon. The reason for turning round and going straight back was that Sunday was forecast to be sunny and I wanted to walk the ridge to Abergavenny and listen to the jazz at the Hen and Chicks, always a very enjoyable day out.   So after a quick snack and a coffee I did a bit of food shopping in the local supermarket and then headed for Cardiff, arriving in the store car park at 18.18.  It was closed.  Open until 20.00 in the week it closes at 18.00 on Saturdays.  I was trapped, hovering between depression and fury.  Again I hadn’t read the web site carefully enough.  I could do nothing but turn round and come home yet again, empty handed and frustrated.

Not to be.  Stowing away the clothing ready to wrap in the early hours of Christmas Day (it always seems to work out like that) I noticed that the sizes shown on the labels inside 3 of the 6 garments I had bought were different from those on the hangers on which they were displayed in the store.  I got back in the car, by now beyond frustration or anger and overcome by weary resignation, and went back to the store for the fourth time.  One of the store assistants ventured the view that such problems arose because American sizing was different from UK sizing.  I barely had the energy left to object to this but she clearly regarded me as an aggressive troublemaker when I pointed out that children’s clothing is sized in months and years, 18-24 months or 3-4 years for example, and that, as far as I knew, America had the same number of months in a year as the rest of the world.

I got home at 15.30, put my boots on and went up the mountain.  It would be dark in an hour but at least I was somewhere I wanted to be.  Christmas frustration and neon lights receding into the past, put into perspective by the peace and calm of the mountain top and the sun setting impressively beyond the ridges to the west. 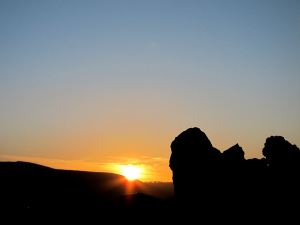 Sun setting over the western ridges of South Wales 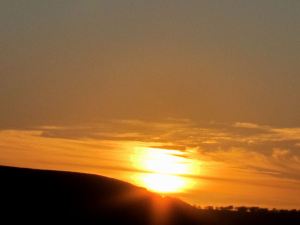 Thin clouds making the sun look like an impressionist painting

This entry was posted in Grumpy Old Men. Bookmark the permalink.