Greece 2011: Filoxenia is alive and well on Symi

I needed a good long, hard walk on Wednesday, so after the usual preliminaries I set out to walk to the Byzantine Wine Presses high on the ridge via the mountain-top monastery of Stavros Polemou (‘The Cross of War’ I think it translates as but referred to in English by Greeks as ‘The Cross’).

The first part of the walk is inexorably uphill, a long way uphill, until the climbing slackens and the path meanders along the ridge.  And it was hot, partly because the air temperature was higher anyway but partly also because there was no breeze, not even a zephyr (why did Ford once think it a good idea to name their top-of-range-car a ‘Zephyr’??).

As I trundled fairly easily if increasingly warmly uphill my mind suddenly homed in on the fact that last year the monastery I was aiming for and one of the key ‘shade spot’ monasteries on the way had been padlocked to stop anyone getting into the enclosure.  OK, maybe lock the church and the accommodation ‘cells’, but why prevent access to the shade under the trees planted specifically to give rest to weary travellers?  It was the antithesis of the principle of φιλοξενία – ‘filoxenia’, defined as “the friendly and generous reception and entertainment of guests or strangers”.   In previous years they had been open to allow free access but last year were very firmly locked apparently in response to incidents or the fear of vandalism.

The enclosures of the first two monasteries I passed were locked but I knew that was not an issue because there was plenty of shady places to sit outside.  But as I trudged ever upwards into the mountains and became ever hotter, particularly under the collar, in anticipation of what lay ahead, I started to not only rant inwardly but to compose what I would write in the blog:  “ On the island of Hydra mountain churches are open and they leave boiled sweets to refresh travellers in lieu of fresh fruit.  On Amorgos they welcome you with Raki and iced water.  On Symi they lock the gates against you”. 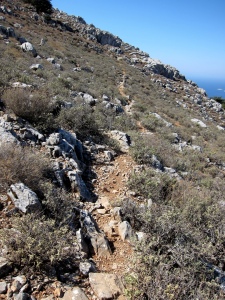 The nature of the path ... just my sort of thing

Through the cathartic act of creativity I had got the aggression out of my system by the time I reached the first monastery and was delighted, and not  a little chastened, to see that though the enclosure was indeed locked, chairs had been placed outside under the shade of the trees.  Fantastic!! Filoxenia lives on!!!

Chairs set out under the trees

Outside the fence but in the shade and very comfortable

The next section of the path is the most paint-signed path I have ever seen anywhere.  Blue and red dots the size of footballs, 30-45 cm crosses (remember the name of the monastery!!) and similar sized arrows on nearly every rock.  All unnecessary because the path was clear anyway.  I composed the next bit of the blog:  “they make it crystal clear how to find the place but then lock the gates”.  Yes, you’ve guessed it.  I was wrong again.

This time the gates were closed against the goats but left unlocked.  Even more chastened this time and regretting such harsh thoughts about the demise of filoxenia in the face of paranoia. 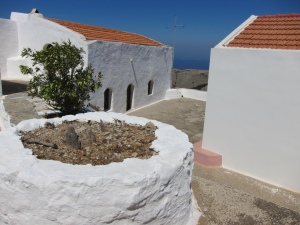 Inside the monastery enclosure on top of the world. 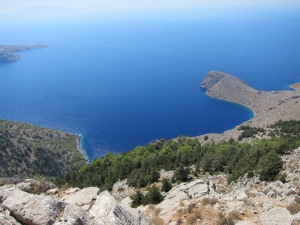 From the monastery enclosure looking straight down the cliff 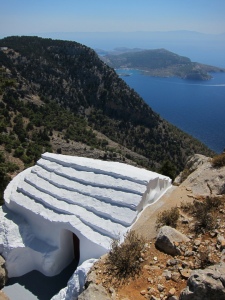 An old church set into the rocks just under the top

From the mountain top I headed back down and further along the ridge to visit the Byzantine wine presses.  I went there last year for the first time and found the area fascinating.  Ever since I first saw them, each time I have passed this way I have visited one monastery with a cool, shady courtyard and an amazing interior and another with …. a polar bear. 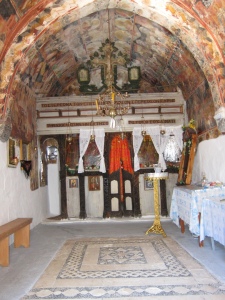 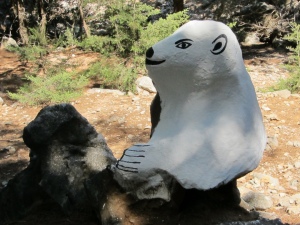 As it was time to eat I went to another small monastery which was bedecked with bunting and flags, obviously the aftermath of a celebration. I ate my banana and nutbar and then, as happens now and again, stretched out on a wall under the large shade tree and dozed in the midday heat. Very relaxing, even if it doesn’t get my cornmeal made.  (C’mon, you must know the song) 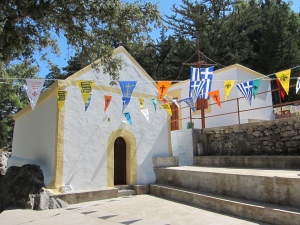 After a fairly short time I jerked back to the real world as I heard someone approaching.  Very long story this so I’ll shorten it.  It was an old woman who obviously spoke no English whatever which is always a challenge for my Greek.  She invited me to go in and look at the church which she unlocked.  I made appreciative noises, admiring in particular the hand-carved wooden screens and she pulled up a chair for me to sit on.  The cool and calm of the church were very pleasant and I guess I must have looked at ease.

The next thing I know is that the old lady has thrust a €10 note into my hand which she said was for me to have a coffee afterwards.  I tried to protest but know that to refuse to accept filoxenia can cause offence.  So I thanked her with the usual hand-to-chest indication of sincerity.

We then went back outside and there then followed a period of animated conversation from her which I barely followed.  It seemed that her husband was coming but that I had one quality which he lacked: I was tall.  I failed to grasp the relevance of this until it dawned on me that she wanted me to untie the bunting from the trees.  As is often the case, it seemed that more people had been prepared to help set up for the party than to clear up afterwards and the bunting had been put up by somebody tall who had since left the scene.

No problem at all.  When her husband arrived two things were clear.  There was no way that he could have reached the fixing points of the bunting and flags.  And he was relieved that he didn’t have to try.  I learned how to fold up bunting ready to store for next year and we finished the job together in not much time at all.

The couple then invited me into the accommodation part of the monastery for a coffee.  Again I couldn’t refuse, they would have been very upset.  But I didn’t know what to do about the €10.  The coffee was naturally Greek, made in a very flowery briki on a tiny camping Gaz gas stove.  I overcame my total antipathy to Greek coffee by having a little sugar in it.  While I was sipping it delicately they brought me a plastic bag of food and fruit juice ‘for after’.  I think they were very concerned that I had walked there and had to walk all the way back.

It was an amazing passage of time.  No idea how long I was with them altogether.  I didn’t look at my watch before, during or after.  Partly because I didn’t have one.  Mainly because it was irrelevant.  I was dozing off and then was in an interaction with real people in real time that was outside of ‘clock time’, if that doesn’t sound like gibberish.  It had a natural beginning and end.

I was buzzing all the way back to the village.  I can’t remember a day when my prejudices at the beginning were so completely turned on their head by the end, grumpiness turned to pleasure.  Filoxenia lives on!!

That view again, but this time from even higher up the mountain

This entry was posted in Uncategorized. Bookmark the permalink.