Amorgos to Kos: round the clock

I was wrong about the taverna getting ready to close at 02.00. Come 03.00 and it had a new lease of life with a dozen or more people trickling in for a crêpe or an ice cream.  I broke the habit of a lifetime and had a chocolate crêpe.  At 03.00 in the morning?!?!  Mad!

I was getting thoroughly bored by this time.  The taverna was showing no sign of closing so I left my clobber and went for a walk along the harbour.  I noticed that as well as the racing yachts parked side-on to the quay and to each other there was also a posh yacht thing parked side-on …. filling the whole of the space used by the big ferry to park.  Bit puzzling that, especially as there was nowhere else anywhere near big enough to park the ferry.

When I got back to the taverna I checked the on-line ‘live map’ of marine shipping.  Very interesting web site.  It gives the position, speed and heading of all ships by category.  The Blue Star 2 which I was to catch was nowhere to be seen.  It should have left Piraeus just before midnight, more than 3 hours earlier.  I tried searching for it by name and by company but still no sign.  Given that they had randomly changed the time by 4 hours when I caught it in Kos to come to Amorgos, a fact I only found out when I enquired in the shipping office about whereabouts in the harbour it left from, and then it was very late anyway, I was getting a little concerned.  Normally it would not be an issue but I needed to get to Kos for the flight home.  Gulp!

On top of all this I was the only person in the taverna with any luggage.  The rest were all locals having an all-night session.  I expect that this is why so many people paid Laskarina Travel handsomely to take the hassle and uncertainty out of travel and transfers as well as ensuring good quality accommodation.

At about 04.30 my fears began to subside when the posh yacht thing untied and disappeared into the night, purring quietly presumably so as to not wake the slumbering owner. I checked with a passing member of the Hellenic Coastguard, who had been sending the posh yacht on its way, and he told me confidently that the ferry would arrive in half an hour.

Then about 15 minutes later a trickle of half-awake people began to appear, disconsolately dragging Big Bags.  The trickle became a steady if turgid stream and by 05.15 it seemed that half the population of the island was waiting bleary-eyed for the ferry either to get on board or see someone else off the island or meet someone coming to the island.

The ferry arrived 05.30+ to the great relief of me if no-one else.  The Hellenic Coastguard marshalled us according to their perception of the issues.  I must confess to a personality failing here.  I look at a situation and work out the best and most efficient course of action irrespective of any guidelines which are issued.  They are after all, just guidelines!!  Translation: I stood in the wrong place.  Another personality failing is that at times I can be a little competitive.  Translation:  I wanted to be first on in order to get the best choice of seats.

The procedure with these MegaBig Ferries is that enormous ramps come down for vehicles to get off, normally jumbled up with over-competitive  foot-passengers.  And a narrower ramp with carpet unrolling as it lowers comes down on the right as you look at the back of the ferry exclusively for the use of foot-passengers.   This is the one which leads to the escalator whisking you upwards to The Other World.   The foot-passenger ramp lowered last and like a hare at a dog track I shot off towards it.(I must hasten to add at this point that I have never been to greyhound racing).  From the whirring of tiny wheels over concrete and out of the corner of my eye I realised that the rest of the waiting crowd were in pursuit.  A stampede had started.

At the foot of the ramp I was stopped by a uniformed person telling me in no uncertain terms in English and Greek to WAIT (I assume that they were even  more uncertain terms in Greek than in English though my grasp of the language is insufficient to suss out nuances like that).  He was wearing a white shirt so he must have been important.  Blue shirt personnel now get to wear their own clothes. Part of the austerity measures I guess.  That was when I realised that the escalator was coming down and not up.  It was switched on to bring down the elderly and infirm who couldn’t manage the steep metal stairs which the rest of us had been directed to when we left the ship on the outward journey.

Incredible numbers of people were getting off the boat, far more than when I arrived 2 weeks ago.  The harbourside is nowhere near as narrow as at Symi but it is essentially the width of a road with parked vehicles and shops.  It is a chaos of people, motorbikes and scooters, cars, and very large lorries trying to manoeuvre to get off …. and others to get on.

When everyone was safely off we were beckoned on and I was first up the ramp.  YES!! Triumph!!  But then total, unadulterated, abject humiliation.  In my haste I didn’t quite get the wheels of my bag quite square with the result that as the escalator treads opened upwards my Bib Bag twisted and pulled me over as I was gripping the handle.  The rucksack which I had slung over one shoulder then twisted and pulled me completely off-balance downwards.  The staff were very quick off the mark and stopped the escalator before I fall completely base over apex.

The thought that flashed through my mind was not “I might get hurt” but “they’ve got me pegged as a doddery, incompetent old man”.  When I got across to them that I was in fact a lithe, agile bloke in the prime of life who had been a victim of circumstances they restarted the escalator so that the rest of the island who had witnessed the whole embarrassing event could follow me upwards into the world above.

As I reached the top of the escalator and was pointed in the right direction by a very polite uniformed person I realised that my foot was getting wet. NO! Not that!  Blood was trickling at a steady rate from my shin.  The escalator had bitten me!!!!  I had survived 6 weeks of leaping about mountain sides in all conditions with no damage whatever other than repeated attacks by ferocious spiky plants.  And now I get bitten by the technology!!!!

I put it down to nearly 24 hours without sleep and a mind bored to distraction but I don’t anticipate any sympathy or understanding.

I always carry a comprehensive first  aid kit in my camera rucksack, just in case.  It came in very useful now.  As passengers from Piraeus slumbered and snored around me I stemmed the flow of blood and applied a dressing.  The damage to my self-esteem is more difficult to deal with.

The lounges on the ship looked like the aftermath of mass murder.  There were bodies draped everywhere.  On the bench seats, across 2 or 3 armchairs, on the floor … very weird and uncomfortable looking positions.  Many had brought bedding: blankets were everywhere in evidence and even the odd airbed.  No chance of finding anywhere to sprawl out.  Lucky to find the odd seat.  .

The journey from Kos to Amorgos 2 weeks ago was scheduled to take 3 hours with no stops between. In fact it took slightly less, trying to make up lateness.   The same ferry on the return journey takes 5 hours calling at Patmos and Leros on the way.  I had been to neither so was interested in a brief, ships-eye view of the islands.

Patmos: looking over the harbour to the castle in the Hora on the hilltop overlooking

The main thing which struck me about both places was that though they had dedicated harbour areas, albeit small, there was complete chaos despite the attempts of the Hellenic Coastguard to instil some order.  There is  no way that a huge vehicle and passenger-carrying ferry can keep to a timetable because of the complete unpredictability of the unloading and loading operations which go on at the same time in a very confined space.  There was 10 times as much manoeuvring space inside the ferry than on the harbourside.

Symi has been trying to get Blue Star Ferries to stop there en-route to Rhodes but frankly I can never see it happening.  The end of the harbour may have been modified to allow it to park but the harbourside is so very congested that it would be impossible to load and unload.  It can barely cope with the small vehicles getting on and off the high speed catamarans.

We arrived in Kos over an hour late.  I had reserved a room in the hotel recommended by people on Nisyros and had sussed out where it was so I trundled my luggage straight there.  By now it was 12.30 and I was feeling the effects of 30 hours without sleep.

Then armed with a very useful street map given me by the owner of the hotel together with some advice as to places worth seeing I sallied forth (how does one ‘sally’?) to look at some archaeology.

I had already looked at the Ancient Agora site a couple of times with both Enfys and more lately Ruth so decided to head for an area marked as the ‘Western Excavation’.  Fascinating.  I spent an entire afternoon wandering around a couple of sites, not having much information but just interested to look at how it is emerging out of the ground.  Kos has a great deal of archaeology to offer and it is open to wander around and is all free of charge.

Part of the 'Western Excavations'

Photographer standing on the edge of history

Part of one of the mosaics 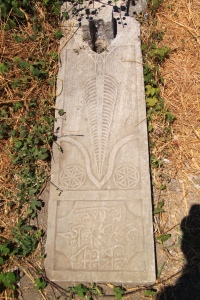 One of the many pieces of carved marble lying around 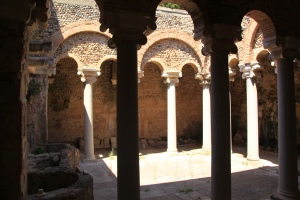 Taking a peek inside the 'Nymphaeum'

By 16.00 I was decidedly peckish and realised that all I had had to eat since 20.00 the previous evening on Amorgos was a chocolate crêpe at 03.00 and a Danish pastry for breakfast at 10.00.  I had a hankering for Tzatziki so went in search.  I tried 3 different places before I eventually tracked one down.  It seems that Kos offers more by way of Italian food than Greek, signs saying ‘Genuine Italian Pizza’ emblazoned all over the place.

I didn’t want to doze off and ‘spoil my sleep’, as my mother used to say, so I wandered around, had a beer, had a meal, wandered around some more.  I managed to stay awake until midnight and then just crashed out.