I struggled into the world again this morning locked into the short term automatic reactions to cope with life before the day begins.  Caffeine is a great gift.  But how did people find out what to do with the beans to turn them into this most pleasant and efficacious of drugs?  Very technical process but, as Bill Bryson records,  there were coffee houses in London before tea was even heard of in Britain.  And how come that the Greeks got it wrong for so long, destroying it by boiling!!!   Thankfully they have now got it sorted.

I have walked around the Katapola/Chora axis a fair bit now but there are mountain villages further to the west so I thought I would do a walk in that direction.  The walks book has a good walk which with embellishments would take about 4 hours – but that was one way.  Consulting the bus timetable in the square showed that those villages had weekday service only.  So I put that off until Monday.

Instead I devised what turned out to be a brilliant circular walk.  Following an old kalderimi from Chora around on the North side of the ridge crossing it in a col and then dropping back down onto the North side to an old monastery, Agios Georgios Varsamitis.  Great path.  And I saw and managed to get a long-shot of what I think is a kind of falcon.  Looked a bit big for a kestrel and with narrower wings  Not flying haphazardly like the insectivorous Eleanora’s Falcon. One shot showed it’s colouring. 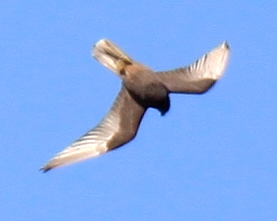 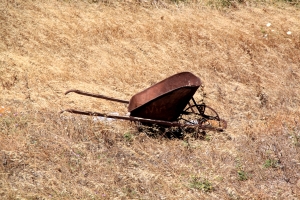 But at least this stayed still

The wind was again phenomenal and as I crossed the col the venturi effect was astounding.  I could hardly stay on my feet.  I had to cower behind a rock to check the map.  But we’ll come back to the venturi effect later in the day.

The walk down from the ridge to the monastery was short but went from howling wind to peace and calm.  As I entered the enclosure I stopped in the shade of an ooleander bush to check the photos I had taken and a guy appeared and asked if I had just arrived and was I on my own and did I wanted to look inside.  I don’t really do interventions like this but not wanting to cause offence I said ‘Yes’ to all three questions.

He could not have been more helpful and friendly.  I was in shorts and sleeveless top so asked if that was OK.  The iconic Hozoviotissa Monastery which I finally visited a few days ago has a strict dress code which I was now failing to meet.  I did I have a sleeved top in my rucksack which I offered to put on but he said not to bother.  This monastery didn’t adhere to the strict dress code.   He gave me a brief outline of the history of the monastery, only re-opened this year after many years closed up.  One of the two ladies who now looks after it is going through the process of becoming a nun and will be ‘admitted’, or whatever the correct term is, in September.   The church was more ornate than some of the mountain churches but somehow very peaceful.  There were frescoes and paintings from the 18th Century and a stone plaque in the floor where the last nun to have lived in the place was buried in 1757.

He finished his concise and very informative introduction and then said I could light a candle or pray or just take photos.  I said I would take photos and then pray.  Sunday morning about the time that services were beginning back home seemed a good time to stop and pray.

As I was leaving he pointed out an opening in the wall with a pool of water inside.  Turns out that the church was built on the site of a pre-Christian Greek temple where people would come to drink and have their future foretold.  Apparently one of only 3 such places in Greece.  My guide said that they didn’t use the water now because that was not part of their faith ….. only God knows the future.  Amen to that!

Then, as I was thanking him on the way out, he opened another door and invited me inside because it was their custom to offer visitors a drink.  The room was very simple: light, cool, fresh painted, comfortable and airy.  The drink was the same as it had been in the Hozoviotissa Monastery, raki.  But this was raki, which is a very rough, distilled spirit, mixed with honey and cinnamon in a tiny glass.  Served with a large glass of ice-cold water.  Not at all intoxicating and very pleasant.  I was the only person there and he sat and chatted in very good English for 20 minutes with background about the monastery and himself.  Fascinating!  And he recommended a walk to do when I get to Eghiali.

There was no hint of asking for a donation or requiring any payment.  Deep-rooted in Greek culture is the concept of ‘filoxenia’ , – hospitality, the welcoming of strangers.  I remember on Hydra some years ago that it was the custom to offer visitors to the mountain churches fruit but as that was impractical now that most of them were unattended there were small bowls of boiled sweets instead.  Generosity of spirit seems very much part of Greek life. 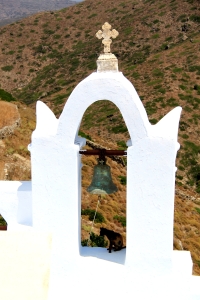 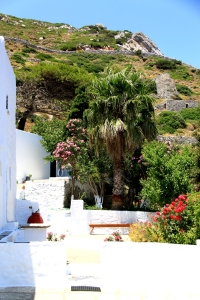 Small courtyard at the front of the monastery 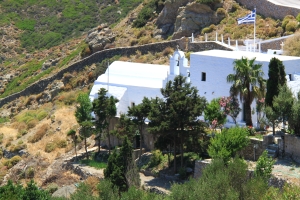 But I eventually bade him farewell.  A curiously very English phrase which summed up the formality of the moment.

I continued on my way back down to sea level on the very good kalderimi, enjoying just being there.

I stopped off on the way at Minoa, basically an archaeological dig where work seems to have stopped some while ago.  I guess funding has fallen on hard times.   The excavations completed so far are reminiscent of the Paliocastro on Nisyros but very much less extensive. 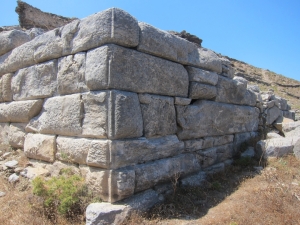 Very much like the Paleocastro on Nisyros but a lot smaller 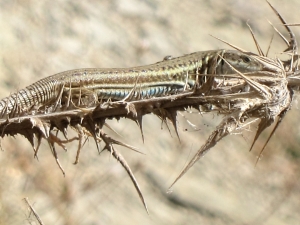 Lurking around the restored 'country house'

However restoration work had been completed on an old ‘country house’ at the beginning of the track up to the excavations.  This showed a very different basic architecture to the old houses on Nisyros with a flat roof supported by wooden beams radiating from a very large central pillar which took up a good bit of the floorspace.  I had seen a number of derelict houses with a similar construction but with the roofs collapsed as timbers rotted.  The stone barrel arch construction of Nisyros is much more durable.

From Katapola I walked back up the kalderimi to Chora

…. and did the usual end-of-walk things before the next part of the plan for the day, walking up to the windmills to photograph the sunset from there.  The thinking was that not only would they add to the picture but I could get the castle rock silhouetted.

The Greeks certainly knew a thing or two about siting windmills!  The wind was still strong and as I got close to the ridge top I could hardly  stand let alone walk.  I was clutching my Canon EOS and very anxious not to stumble and damage it.  That happened once on Tilos and I had to buy a new lens, a costly trip.  We learned about the venturi effect in aerodynamics as part of the paragliding exams.  It’s basically the concentrating of the wind as it is forced to go over the ridge and is strongest just at the front edge of the hill.  It’s like being punched with a fist rather than pushed with the flat of the hand.

Ferocious as the wind was I wasn’t the only one up there. Obviously a few others had had the same idea for watching the sunset and were scattered around sitting on rocks. 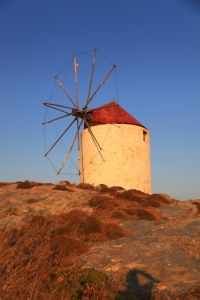 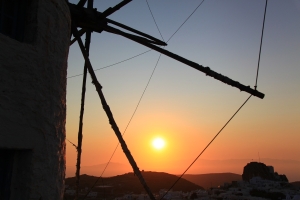 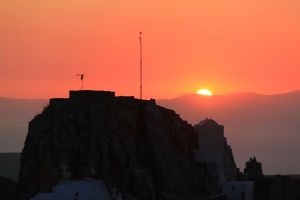 Castle Rock silhouetted as the sun sinks behind Naxos