Amorgos: the ups and downs continued – on a high at the top of Chora

Back in the room I did more stuff on the computer, had a shower and then it was time for a beer in the main square.  I think it’s the main square because it is bigger than the others and has the Police Station on the one side and the Town Hall on the other.  I have taken to going to one particular taverna in the square because the seats are comfortable, the guy is friendly and the beer is not extortionately priced.   I had tried the place I go for breakfast for a beer one evening.  They don’t do Amstell, the tipple of choice, but a Greek beer called ‘Fix’.  Problem was that it was expensive and not that brilliant.  Shame, it would have sounded good to say I was going for my daily Fix.

I have taken to reading Bill Bryson on my Kindle for half an hour or so sitting comfortably in the square.  Friday night I finished it after about 10 minutes – and bought another book ….  instantly …. without moving from my seat.  How cool is that! Amazing!!!!  In the back of the back of beyond and I can buy a book of my choice and be reading it within seconds.  This time it was ‘The Hemlock Cup’ by Bethany Hughes, about the Life and Times of Socrates.  Hint:  the book’s not bad but she’s better on TV.

Anyway, feeling a bit smug about my technological triumph, I went to pay for my drink. In hard cash.  I didn’t have change so went in to pay with a note, but that was a pretext really to ask if there was a key to the castle. The castle rock just behind the square has a castle on top.  Obviously!  But the only way into it is through the locked door of a church at the top of an incredibly steep and narrow outside stone steps.  I had walked around the rock three times trying to see if there was another way in but short of rock climbing, difficult with an SLR camera and in sandals, the answer was a definite ‘No!’.  Chris and Angela had said that in the past they had had a key from one of the tavernas in the square, hence the reason I thought I would give it a go.

The taverna guy understood my dreadful Greek, I mixed up the word for ‘key’ with the word for ‘closed’, and was only too happy to let me have it.  Amazing that I was actually in the right place and had been going there regularly and so had inadvertently established my credentials.   I said I would come back for it shortly and returned to the room to change into my evening clothes and get my cameras.  ‘Evening clothes’ sounds good, but it’s really just trousers and a proper shirt, Enfys and I having got into the habit of dressing tidy for evening meal when we were over here.  My plan was to be up in the castle for sunset and would then go straight to a restaurant to eat.

Back to the taverna and collected the key.  It’s massive, just how the key to the door of a castle should be.  I zipped it safely into the pocket of my Rohan trousers, always supplied with secure zippy pockets for just such occasions, and climbed up to the door of the church at the entrance to the castle.

The Key to the door: the ring-pull is about 4 inches diameter; note the key fits in upside down to normal

It was quite hairy just climbing the steps because they are so steep and narrow and the wind was immense.  I unlocked the door easily enough, someone must regularly oil the mechanism, but I struggled to control opening it in the wind, and once inside struggled to keep it closed.  I was in a kind of stone-built airlock with another door straight ahead up steps into the castle itself and a locked door on the left into the church.  Problem was that closing the outer door made it pitchy black inside so I couldn’t see the other door.  To cut a long story short, I had to heap rocks against the outside door to keep it closed and to tie back the inner door with a short length of rope to stop the two of them smashing off their hinges in the wind.

It was worth it. Climbing out of the airlock into the castle required care in the strong wind.  The first views were of the ridge of windmills on to the Southeast which the setting sun was lighting up golden.

Church on the left, castle on the right, Windmills on ridge beyond

Chora and the ridge behind: for context, the path down to The Monastery starts in the col mid-left

Golden glow at the top of the castle

Struggling in the wind to the top of the castle the rocky ground offered views towards the sun sinking low over Naxos in the Northwest with the colour in the sky extending to views across to Ios in the West.  I had to brace myself against the stone walls in order to augment the image stabilizer on the camera lens and keep steady enough to take photos. 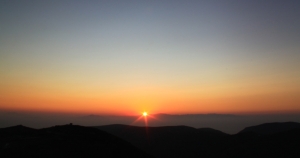 .... until it disappears behind Naxos

Meanwhile the colour extends right round to Ios in the Wast

It was a magical place, I didn’t want to leave.  Like being on a mountain top, high above everything around.  But this was in the village, the old core of the place.

I carefully fastened to big old catch on the inner door then carefully locked the outer door with the massive key and even more carefully climbed down the steps.  Even more carefully because I was on an adrenaline high and I know from rock climbing, canoeing, paragliding and the like that that is when there is a tendency to feel invulnerable and for accidents to happen.  I was certainly on a high.

I paused only to take a last shot from the bottom of the steps of the dying colour in the sky. 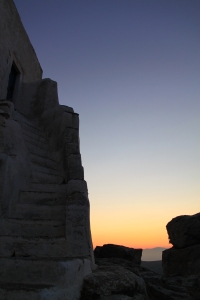 Last look: note the steps to the entrance door on the left

Not to be forgotten.  That’s why I’m boring you with loads of pics.  And why it took two attempts to write the blog.

What a difference between the beginning and end of the day.  Shows how God answers prayer.