Never trust a word I say again!!  The Greek word for computer is NOT υπουργείο  as I brashly said in the blog for Saturday.  It is υπολογιστής.  My excuse is that, as the blog says, Greeks use the word ‘computer’ and so the Greek alternative is never refreshed in my mind and has slipped into oblivion to become confused with the Greek for ‘Government Department’, with which I have even less familiarity.  Theo would not be impressed that his years of patient tutoring were so wasted. Alright, and they do both begin with υπο (pronounced eepo)

Putting the embarrassment behind me, if I will ever be allowed to do so, Monday was another good day’s walking.

Another round-trip from the town, the details of which I won’t bore you with save to note that I was walking from sea level to the caldera rim, down to the caldera floor and then back up to the crater rim before dropping back down to sea level and a very refreshing and very welcome swim.  About 5 hour’s walking in all.  For those who haven’t swum in the Aegean it’s very definitely one thing you should do.   Even at this time of the year when the water is colder than at any time during the rest of the summer …. it’s a fantastic experience.  I love it and miss it hugely when I’m not here.

I did spend  a little time at the top of Emborio on the crater rim just because it’s always a good place to be.

The main street in Emborio

The caldera and crater seen through the entrance to the castle 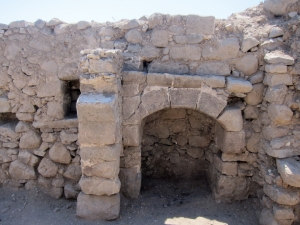 Little remains of the castle but it is being recently excavated 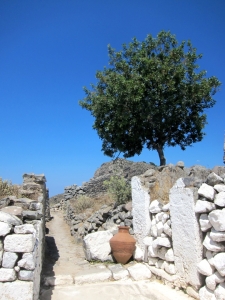 And I did spend a bit of time again at the top of the col on the way back to Evangelistra just because the place breathes antiquity. 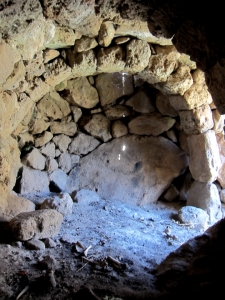 Stone-arched extension to the original cave dwelling, one reason the ancient houses have survived so long 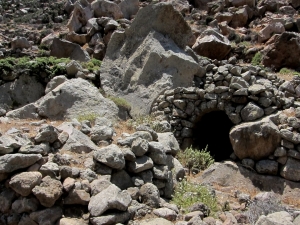 Perhaps I should mention at this point that I have now been over here for 2 weeks and it seems like forever.  Slipped into the life as comfortably as into an old coat. Or perhaps more appropriately, an old pair of walking sandals.  Though come to think of it my old walking sandals are nearing the end of their natural so it’s perhaps as well that Ruth and Tim brought me a new pair when they came out.  They had to do the same last year as I remember.  Guess I’m pretty heavy on sandals – Teva please note!!!!  Quite happy to accept sponsorship and carry out trials.  If they stand up to what I do in a summer they will stand up to anything the Great American Public can throw at them.  Though on reflection I can’t replicate the weight.

Other photos?  I thought I would just show a few shots of ‘normal’ paths so you can see the bits where I get up a head of steam and fair zoom along. 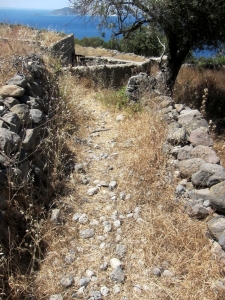 Note the dried grasses and wild oats and barley which are very much in evidence on all the paths.  It’s great to see the many flowers, as Ruth showed, but life here is not all (rock)roses.  As High Summer approaches pretty much everything dries up and crisps to a ‘barley straw’ colour.