I’m back up North again now and, having left the car at home and travelled by train, I’m back to walking.  Urban walking isn’t normally my thing, I’m much more at home in the mountains but this is a matter of getting from A to B so, in the words of the old adage, it’s best to make a virtue out of a necessity.  The fact that it is has been sunny most of the time has been a big bonus.

For a start I’ve taken to walking regularly to a supermarket via a large urban common.  It’s not the closest for shopping but the walk is very pleasant, particularly with a little warmth in the sunshine and the early signs of spring.   The resident birdlife is always interesting, particularly around the pond and though there are no expansive vistas the setting sun can be spectacular.

Tranquil in the sunshine

Heron reflecting in the sunshine

It's fed-up mate reflecting on what went wrong 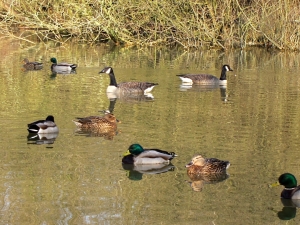 Rush-hour on the pond 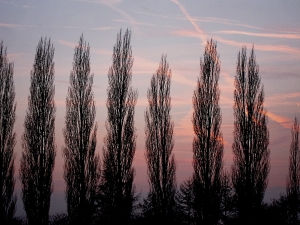 But over and above the walking necessary to get places, on Tuesday I went on a nostalgic urban ramble in Salford with Ross, an old college friend living nearby.  Train and bus up to Irlams o’th’ Height where I lived as a teenager, walk down to my old school and then down to Seedley where I lived up to the age of 12.  Even after all this time I remembered the way.  And remembered various incidents and happenings such as the spot where I fell off my bike cornering on gravel too fast and landed on my elbow which still has a hole in it.  And the spot where I nearly knocked myself out on a street sign while seeing how far I could walk along the pavement with my eyes closed.  Strange how my memories of life are dominated by a long string of minor injuries.

It was sad to see iconic buildings boarded up or demolished.  The museum boarded up and the hot-house reduced to a skeleton in Buile Hill Park.  Both great places which should be preserved.  The red-brick, 3-storied Seedley Council School is still standing though shuttered up but Seedley Baths, once the only public provision for sport in the area, has gone.  Salford Grammar School, nearly new when I went there, has now disappeared.  Not so iconic, the house where I lived in Seedley, is now under the hard shoulder of the M602.

Indeed, many of the old terraced streets have long gone.  But not all.  The house where I was born and the surrounding terraced streets are still there, all with a Welsh Connection: Cardigan Street (I was born in number 7), Pembroke Street, Milford Street …..  Other areas of terraced houses including the once infamous Ellor Street, were replaced first by tower blocks in the ‘60’s and now even they have been demolished and replaced by ‘low rise’ but still characterless developments.  The demolition of the terraces marked the demolition of communities and a way of life.

I dragged Ross around a bit, probably past the point where he had lost interest in my reminiscences, but then we went to Langworthy Road.  It was behind Langworthy Road that Friedrich Engels, one of the fathers of communist ideology, had a cotton factory and, appalled at the squalor of the area, coined the phrase ‘the classic slum’ in his book ‘Conditions of the Working Class’ to describe it, a description taken up by Robert Roberts as the title of his book.  We never thought of it as a slum.  It was simply ‘home’.

I particularly wanted to go back to what we used to call ‘Chimney Pot Park’, a nickname given to it by us locals because it was a small park with a bowling green laid out on top of a large brick-built water ‘tank’ at roof-top level – chimney pot height.  In an area of dense terraced development this elevated park was a breath of fresh air.  And so it was on Tuesday for a number of reasons.  First because it was still there.  Second because the council had obviously taken measures to preserve and improve it.  Third because it was now officially labelled with a large, cheery sign ‘Chimney Pot Park’.  And fourth because it afforded a clear view of the redevelopment work now being done to preserve the facades of the old terrace houses and to rebuild within a steel framework modern, high tech houses/apartments with elevated balcony gardens.  I loved it.  Power to the elbow of the council for being so forward looking by preserving character of the best of the past and modernising it. 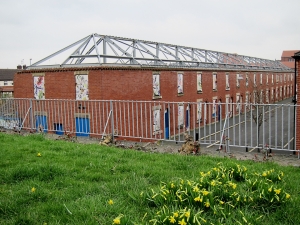 ..... and the steel framework behind.

This entry was posted in Reflections. Bookmark the permalink.