Back to my origins

I travelled up oop North on the train.  At £13 return that takes some beating.  But it means that I am without the car while up here. So in more ways than one it has been back to my origins.

I was brought up in Salford in Lancashire, now part of Greater Manchester, and because the family didn’t have a car, very few did in those days, I went everywhere on foot or by bus or train until I got a bike at the age of 14.

I’ve been back in Greater Manchester, albeit a different, somewhat more modern and middle-class part, for a week and have been going everywhere on foot or by bus or train.  Though in reality very little has been by bus or train.

I have walked miles.  Into the town centre.  To a couple of large supermarkets.  To see an old college friend.  Averaging about 8 miles a day.  There have been two consequences of this.

First, because it is flat round here, compared to South Wales anyway, and because there has been a lot of walking to do, I am now walking a lot faster.  Positively haring round.  Burning rubber.

Second, I have got to see a great deal more than I would have by car. I try to avoid roads where possible, very difficult in a major urban conglomeration but there are some good short distance semi-natural corridors.  One is through an area of urban common and another is along the River Mersey.  This offers a strange mix of wildlife and urban dereliction as well as unexpected historic interest. 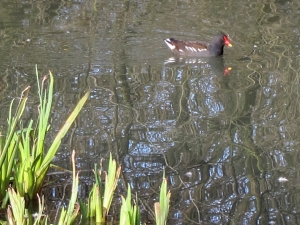 Moorhen on the pond on Heaton Mersey Common 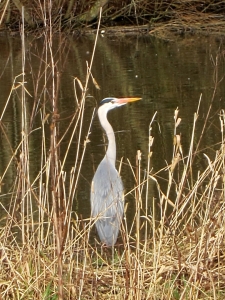 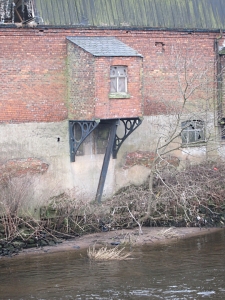 I bet they didn't get those shelf brackets from B&Q 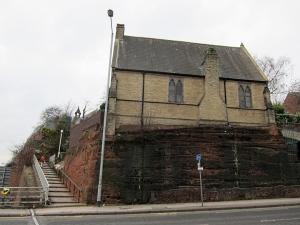 The wise man built his church upon the rock

There are advantages to always carrying a decent compact camera.

One thing which is very clear is that the traffic congestion in the Greater Manchester area is far worse than anywhere in South East Wales.  At peak times it is ludicrous.  Gridlock.  Log-jam.  Why do people put up with it?  Why do they make a fuss when Governments or Councils try to do something about it.?  Ken Livingstone in London is the only person to have achieved any kind of success and Boris campaigned successfully for the mayoral role partly on the basis of repealing those measures.  Madness!!  Greater Manchester Council baulked at the perceived political cost and decided not to introduce similar measures.  Yet the problem only gets worse.  Several times I have been walking significantly faster than the traffic.  I cross dual carriageways through stationary traffic.

I was opposed to the Welsh Assembly being set up and remain highly sceptical of its value having seen it’s workings at close quarters.  Its one achievement of any worth is the concessionary bus pass scheme.  Opponents focus on the cost of funding it but completely fail to take account of the social benefits and the savings to the health service and social services.  If the total cost were compared to the total savings my guess is that the balance would be in the black, quite apart from the enormous benefit in quality of life.

In England the operation of the scheme is decided by each local council and the result is a patchwork.  In some area the pass can only be used outside the morning peak hours and not at all in the afternoon.  The result is a patchwork and must be a problem to work out any journey across local authority boundaries.  I e-mailed the local council where I am to ask if I could have a pass for the few months I am here and was told that only permanent residents are eligible.  So I have to pay.  Which goes against the grain so I walk more.

Not unexpectedly I spend most of the time on my own and occasionally, just occasionally, have a moment of madness, encounter weird sights. 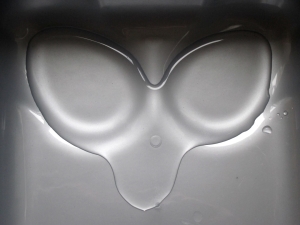 The aliens are watching!

This entry was posted in Grumpy Old Men, Reflections. Bookmark the permalink.