Banff and a Rocky Mountain Winter

Saturday and a day off skiing.  Early morning cloud and mist cleared to crystal blue sky.  So I took my camera for a walk.  Twice.

Towards the end of the morning I walked through ‘Downtown’, still buzzing with New Year celebrants, and then along the river bank, the opposite bank to previous walks so a different perspective and the light from a different angle. It seemed that the ice had thickened up again with the colder temperatures and the snowfall of earlier in the week had re-coated the surface and was blowing around in the strong wind.

The bridge over the Bow River at Banff

Snow sculpted by the wind on the frozen river 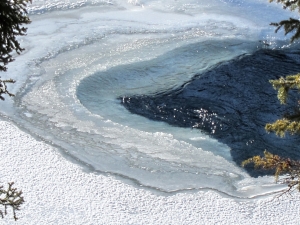 I hadn’t really dressed for how cold it was and I hadn’t told Ruth and Tim I was going further than the shops so I decided to head back around lunchtime.  I wanted to look for the start of another path so I ambled back along a road delighting in the name of Buffalo Street parallel with the river and leading direct to the main street of Downtown Banff.  About 200 metres from the junction I came across what apparently is a not uncommon sight in the town, a deer in the garden of a house.  Pretty short of food in winter I guess they do quite a lot of damage to gardens but this is a national park.

Deer sometimes just wander into the garden and eat it.

After lunch and a look at the map of the town I headed for the top of Tunnel Mountain.  Unlike what I found in Greece in the summer the trails marked on the map were there on the ground.  In this case there is a clearly marked trail, a broad footpath with signs and information boards and, in order to protect the fragile environment, exhortations not to take shortcuts.  The trail climbs up through the forest where it soon becomes clear that the Pine Bark Beetle is taking its toll with a significant number of dead and dying trees. Even so the forest, particularly close to the top of the mountain where the colder temperatures have kept trees coated white with snow and hoarfrost, is very attractive.

Broken stumps of dead trees add a splash of colour

On the top of the mountain some trees become gnarled

Dead tree at the edge of the trail 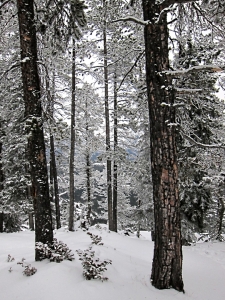 Snow laden trees, attractive even under the cloud

At 1,690 metres (5,543 feet) Tunnel Mountain is not as high as many of the neighbouring peaks but gives dramatic views of those other peaks, of the Bow River Valley and of Banff.  There was no sign of a tunnel which I supposed might be something to do with the mining of minerals in the area in the past.   The information board at the top offers congratulations and the information that one local lass walked up there 8000 times in 40 years, (that’s 4 times a week!!!) and that in 1939 a certain Elizabeth went up there with her daddy King George V, which isn’t quite as impressive.  All this in both English and French.  No word in either language about the Tunnel however.

It was both cold and windy on top of the mountain and ice formed on my beard again.  The shame was that it had also clouded over in the afternoon as snow moved in so the photos again lack contrast and colour but I was sufficiently enthused by the walk to determine to do it again when(if) it is sunny.  Nevertheless, in some small way they show a little of the drama and beauty of the Canadian Rockies in winter.

Mount Rundle and the floor of the Bow River Valley 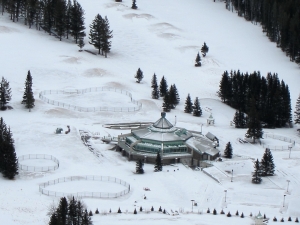 Zooming in on the floor of the Bow River Valley ..... Haven't found out what this is yet 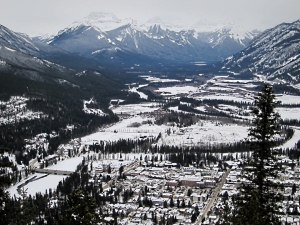 Zooming in on the town bridge and the frozen river

As is my wont, when I got back down to the start of the path I read the information board which had facts and advice about both the walk and Tunnel Mountain and a final flourish right at the bottom “PS There is no tunnel”.  It seems that there had been the intention to build a railway tunnel through the mountain but in the event the engineers decided to go around it instead.  It seems to me that if topographical features were named after intentions rather than completions the atlas would be full of unrecognisable names.

This entry was posted in Canada, extreme gardening, Winter. Bookmark the permalink.

1 Response to Banff and a Rocky Mountain Winter