Many years ago we changed the whole nature of our Boxing Day as a family.  We got fed up with just sitting around and eating yet more food and becoming bloated and lethargic.  So we started asking friends over, going out for a walk up the mountain and then having a party afterwards.  It became a family tradition.

This Boxing Day was very different again.  Ruth and Tim bought me tickets for two guided walks into the frozen canyons near Banff, one for Boxing Day, the other for next Sunday.  So after a lazy morning we waited outside the entrance to the hotel for the ‘Discovering Banff’ minibus which would take us to the car park at the entrance to Johnston’s Canyon.

This is only the second time I have been on a guided walk.  First time was in the summer on Symi.  This was quite different but led by an equally knowledgeable, informed and entertaining guide.  It seems that the canyon was salted with low value gold nuggets by a certain Mr Johnston who conned other prospectors into buying the claim from him and the disappeared, presumably to work the same scam elsewhere.  At least he got a major topographical feature named after him.

The canyon was significantly colder than the surrounding area probably because in Winter it gets little or no sun.  Being composed of limestone water seeps out of the strata and in the intense cold freezes into ice-falls many of which are an intense blue colour as impurities absorb the red light in the spectrum and reflect back the blue.  In addition there are waterfalls which freeze from the outside leaving a flow of water underneath the ice-shell.  I know a bit about this having fallen through the ice and snow crust into the plunge pool of a waterfall in the peak District when I was a teenager.  I nearly didn’t get any further in life.

We didn’t need to be encouraged to stay off the ice on the river partly because it was in the local news that a guy went through the ice in this very canyon two weeks ago, and partly because in places it hadn’t frozen over and the clear, cold water could be seen rushing below us.

The 100 feet Upper Falls at the top of the walk were very dramatic, a real ‘Wow!’ sight.

There are too many photos for the blog.  Some are below but check out the album I’ve loaded onto the Canon Gateway site at: http://www.cig.canon-europe.com/p?p=B2HJHBaz7tB

Again a problem with gloomy conditions so no contrast for the photos but they give an idea of what the canyon is like in Winter. 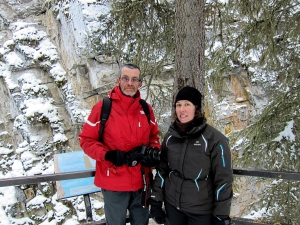 With Ruth in the Canyon 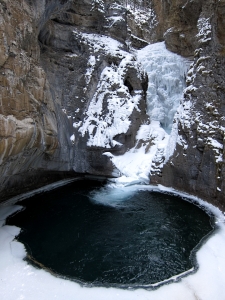 The Lower Falls, frozen but the water keeps flowing 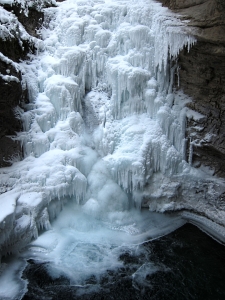 Close-up of the frozen falls 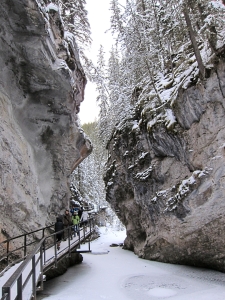 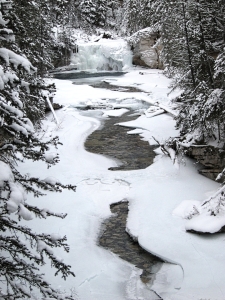 Looking upriver to the Twin Pools 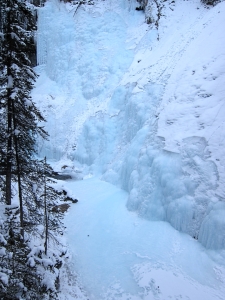 The intense blue of an ice-fall 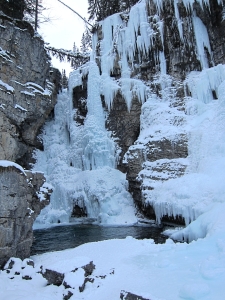 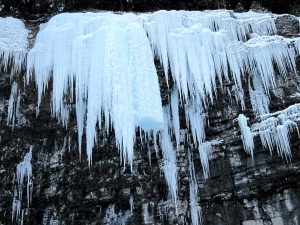 Detail of the top lip of the Upper Falls

This entry was posted in Canada, Winter. Bookmark the permalink.