Having got the bit between my teeth with the loft-clearance I knuckled down to it for the rest of the week (I do love mixed metaphors) and by the end of Friday had about 90% finished.  And I had bought two new mouse traps so that when I had cleared floorspace I could set about the point of the exercise, to catch the mice which were chewing at the cables.

Close forensic examination of the crime scene had showed clearly that the mouse in the trap did not eat its way out.  It had an accomplice on the outside. The teeth marks were very definite evidence of the fact that there were at least two of them, which fitted with the extent of the burrowings and tunnels in the fibreglass insulation.

Checking the traps on Friday evening I found that I had caught the first one.

Then, close to finishing the clearing, I got slowed down by one large box which was half rubbish and half old photos and memorabilia.  Major distraction.  I decided to go through it carefully.

Saturday was dry and sunny and after dithering around with shopping I decided about 16.00 to leave the half-sorted contents of the large box scattered around the living room floor and go for a walk up the mountain behind the house.

I still had the vestiges of the summer fitness so hammered up pretty quickly, glad to be out of the drabness of the attic and stretching my legs.  Sometimes the incentive when out walking is just to get to the top as fast as you can.  It was quite exhilarating after being cooped up for a week.

On the top bands of cloud could be seen starting to drift across from the west giving a very watery, yellow sky as the sun sank lower.  But I hung about on top just because it is a great place to be.  And then as the sun sank lower still and shone on the underside of the bands of clouds instead of through them, the effect was very dramatic affecting the whole sky in all directions.  Autumn colours writ large.  That was a major distraction.  By the time I dropped down off the mountain it was dark.

The sun explodes from beneath the bands of clouds 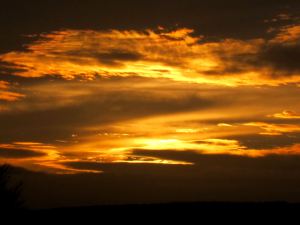 Close-up of the hot-spot

Starting to inflame the underside of the narrow bands of cloud

Close-up of the cloud bands

Affecting the sky to the North 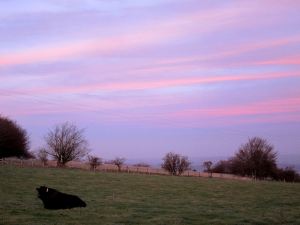 .... in fact bands of cloud lit up in every part of the sky

Back to the West the colour gets even more vivid

This entry was posted in Autumn. Bookmark the permalink.