Rift in the space/time continuum

I have been a fan of Dr Who since the first series when the entire hall of residence which I was in at University gathered in the Television Room every Saturday evening (yes, we had one television for the entire Hall population of 250 students) and hid behind the communal sofas.  Or cheered loudly at appropriate high points.  The Daleks, the Cybermen, the Master …. The Doctor has kept the world safe from them all ever since.  But it is only comparatively recently that The Doctor has had to contend with problems with the space/time continuum.

I think it must be about time for another series because there seems to be trouble with space/time continuum again.  It has struck me several times recently how time and space are breaking down.  It is, frankly, not a little disconcerting.

Looking first at discontinuities in time.

Followers of my Greek Odyssey may remember that towards the end of August, the 25th to be precise, I succeeded in tipping fruit juice into the keyboard of my netbook, thereby rendering it unusable and necessitating the use of a plugged-in USB keyboard which I bought for the modest sum of €12.  Immediately I started trying to source a replacement keyboard.  Amazon offered several for sale but not the one for my model of Asus.  After a few days a guy in the local computer shop on the island tracked one down which he ordered from Athens, delivery in two weeks.  Stretched to 3 weeks, then 4, then 5 …….  When I flew home at the beginning of October it still hadn’t arrived.  Several times optimism was raised but then, unaccountably but frustratingly, everything seemed to move backwards several places.

In a sense this is not surprising in Greece where time is a concept to be debated rather than a real time driving force.  “I’ll be with you in a minute” from a waiter means “sometime tonight”.   “It may take a couple of days” from a provider of goods or services means “probably before you fly home next week”.  The delay in the arrival of the keyboard was blamed on the lorry drivers strike on the mainland.  But I think that is the excuse being put forward to hide deeper, darker shifts in the physical laws of the universe.  I hoped for the best but, though very disappointed, was not really surprised it was a no-show.

Once I got home it would be a different thing.  Just as the hole in the ozone layer is centred over Antarctica and the Southern Ocean so I reckon the rift in the space/time continuum is centred over Greece.

I hoped that once I moved away from this zone of temporal discontinuity I could get by with a little help from my friends (someone should use that as a song lyric).  Sure enough I eventually tracked down a company which could supply a replacement keyboard.  Based in Sweden their web site listed 5,194 keyboards for various models of Asus netbooks and laptops.

The existing keyboard had to be taken out in order to find the model number for confirmation.  Which presented problems of its own. I had tracked down instructions on how to replace the keyboard long before I tracked down the keyboard.  So it was easy!?.   Afraid not.  Two problems.  The first was that the very comprehensive step-by-step video forgot to mention that there are two adhesive pads in addition to four clips holding the keyboard in place and that therefore a modicum of brute force had to be employed.  The second problem was my fat thumb.  Since I cut the end off it with a bench saw it has been less than dexterous, more, well, gauche.  In the event it took four hands to do the job with Tim’s fully functional, dexterous fingers being the key to the process.

Armed with this key information the order for the replacement was placed 9 October, expected delivery 10-14 days. Brimming with optimism I felt confident that Tim would be able to help fit the new keyboard when I went back up to Stockport 2 weeks later.  Not to be.

It is now nearly 4 weeks since I ordered it and it has still not arrived.  Latest information is that it has left Sweden on board a lorry bound for Gatwick.  But on the internet tracking site the couriers flagged up a problem and I had to contact them to confirm the address.  Just as well I tracked it on the internet otherwise it would have disappeared into the rift in the time/space continuum forever.  At the end of the second phone call to the couriers I wheedled out of them the fact that the address was a problem because the post code had been put in the wrong field.

Arguably the package has already disappeared into the discontinuity but being an optimist I am hopeful that The Doctor is in there tackling the problem as I type and in the not-too-distant future a replacement keyboard for my Asus PC Eee 1005HA will be spat out on my doorstep while I’m actually still alive, and at home, to sign for it.  In the meantime I am staying in one place so that I will be here when the courier calls and so that I don’t follow the package into the oblivion it may be bound for.

My concern is that just as the hole in the ozone layer has been getting bigger (though recent evidence seems to indicate it may now be shrinking again), so the rift in the space/time continuum has been getting bigger and is now embracing Western Europe.  An alternative theory, and the one that I favour, is that having spent several months in Greece in the Summer I am still under its influence.

The evidence for this assumption occurred on Sunday.  But on this occasion time was shortened, or even moved backwards.  I went to church in the morning, potched around doing stuff in the house and garden in the afternoon and then decided I needed some fresh air and a walk.  The sky had cleared so I thought I would go up the mountain behind the house to the Folly.  Though the sun was out of sight behind the ridge, when I set out there was a glow in the sky above it which hinted that there could be a good sunset but it would be touch and go whether I got to the top of the ridge in time to see it.  That was when time seemed to concertina.  I remember nothing until suddenly I was on top of the ridge camera in hand and looking at a very spectacular sunset, a great rift in the clouds if not in the sky itself.

Is this the rift in the space/time continuum? Or just a glorious sunset?

Though I have been back home a month now, I still have a residual fitness from the physical demands of everyday-living half way up a near vertical hillside on Symi and from walking virtually every day in the mountains.  But that seems scarcely enough to account for the seeming complete absence of elapsed time between closing the front door and arriving on the ridge-top.  Once there, time proceeded at the normal kind of pace, the sunset lasting for just a few minutes but seeming to last for ages because it absorbed attention so completely.  But that is very simply explainable by the laws of time-perception as put forward in ‘The Magic Mountain’ by Thomas Mann, as I have wittered on about previously.

Discontinuities in space?  Much more difficult to pin down but when I was in Stockport a couple of weeks ago we went to the morning service in Platt church in South Manchester and then I took my camera for a walk.  I could be mistaken but within a few minutes I seemed to be transported to Cambridgeshire or somewhere else in affluent Flat England.  Not only that but I’m sure I recognised one of the ecclesiastical sculptures which featured in ‘Blink’, probably the best Dr Who episode of all time. 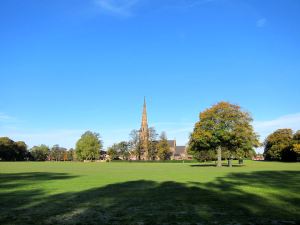 Is this rural Cambridgeshire? Or a park in South Manchester? 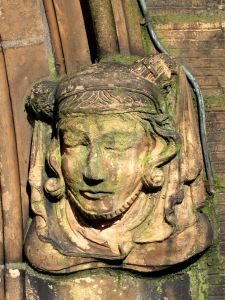 Another example yesterday.  I was furiously digging away trying to clear a section of the vegetable garden before it rained when I spotted a lizard.  But what was it doing there?  They are an everyday sight on the Greek islands basking on rocks in the hot sun and then scurrying away so fast when disturbed as to be difficult to photograph.   This one was very clearly in the wrong place.  Because they are cold-blooded they need the warmth of the sun to survive.  This one could scarcely move. I had to pick it up and put it somewhere out of the way of the garden fork.

Scarcely able to move in the cold, this poor lizard is definitely in the wrong place.

Both of these examples could lend support to my theory that I have been so long in the space/time discontinuity that is Greece that its effect has followed me back to the UK.  Suggestions that Platt Fields just happen to look like Cambridgeshire and that I had inadvertently disturbed the lizard’s hibernation are just too prosaic, lacking in imagination.  Imagination is, after all, one thing which differentiates us from animals.

PS.  Just as I was about to post this blog a knock on the front door and it was the courier with a package which I take to be my replacement keyboard.  Weird timing or what?!?!  Perhaps the space/time discontinuity spat it out again. More probably The Doctor intervened, though I didn’t see the cameras.

This entry was posted in Autumn, new technology, Reflections. Bookmark the permalink.