Greece 2011: I’ve got a ticket to Rhodes … and an attack of the grumps

After giving up on my well-formed but thwarted plan for Sunday I put it into operation on Monday.  Brilliant success!!! To misquote and misinterpret the Beattles’ song, “I’ve got a ticket to Rhodes”.   I got my ferry ticket!!!!

I’m a forward planner by temperament and personality as well as by (former) profession but I have never booked a ticket for a Greek ferry so far in advance.  Not uncommonly we have booked it 2 or 3 days ahead,  but then we have been just as likely to book it on the harbourside minutes before sailing.  Until leaving Kalymnos on Friday it simply hasn’t been an issue.  But now it is.  I’m told that this year people have been stranded on Symi and unable to make their flight when trying to book 2 or 3 days ahead.  No messing with this stuff.  I don’t want to miss the flight.  Neither do I don’t want to spend more time than necessary on Rhodes.  So I booked the ticket today to travel a week on Wednesday, 9 gays ahead.  Seismic!!

Then I went for the walk I had planned from the harbourside.  The path goes steeply up from the town and then gently meanders along a spur up to the northern ridge of the island.  There are good views down to Nimborio Bay, the ridge on the other side and Turkey beyond that, the width of the Bristol Channel  away.

What a place to have a place!

One thing which struck me was that the landscape I was walking through seemed more than ever barren, dry and shrivelled up.  It’s now the end of a dry, hot summer so, up to a point, it is to be expected.  Many of the plants which would have been in flower in early summer were now just dried leaves and dead stems but many of the tough little perennial plants were dry, gnarled twigs with just a few sprigs of green, some with no green at all.  I don’t know the extent to which this is climate change, summers getting hotter and winters dryer, and the extent to which it is because the water table is being lowered by increasing water abstraction to keep tourists in daily showers.

Through the barren landscape

Paths and fields all barren at the end of summer

Dried up, gnarled twigs with a bit of green trying to survive

It may simply be another dip in the long-term climate cycle.  There is clear evidence that this area was once populated and agriculturally rich.  Now there is scant evidence of even those arch-survivors of arid landscapes, mountain goats. 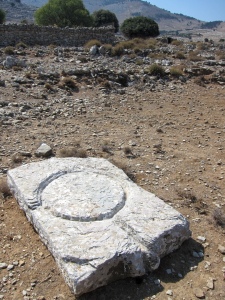 Olive press high up in the col, sign of well established agriculture in the past

My destination was on the other side of the ridge and I was already getting cross by what I knew I would find even before I crossed the ridgeline.  Just over the top and the path goes through a cleft in the rocks and then an environmental atrocity comes into view.  A bulldozed track down to the once secluded and pleasant Toli Beach destroying the path and replacing it with bare soil and rock.  The environment here is so marginal that it will be generations before even sparse vegetation comes back.  And this is all in the interests of pandering to car and bike hire companies, to give them somewhere else to drive to before coming back to town and clogging up the harbourside.  You can tell I feel strongly about this.

Toli was one of 3 pleasant, secluded beaches to walk to.  Now it’s an umbrella beach with the catering concession franchised out.  Another was Lapathos Beach which I walked to yesterday, now a popular stopping-off point for round-the-island trip boats and speed-boats.

Bulldozed track down to Toli Beach

The third was the one I was heading for today, the tiny Agios Isodoros.  Again, I knew what I would find before I got there.  Trip boats from Turkey anchored for the day.  It had been like that last time I was here and I had no reason to suppose that it would any different.  It wasn’t.  As the beach came into view there were two boats tied up to rocks and their fee-paying passengers were splashing around in the water or sitting on the beach.

It seems to me that this can’t be right.  It can’t be right in international law.  And it can’t be right for boats from Turkey to come across and clutter up the one remaining secluded beach on the island.  A quick search of the internet told me that Turkey is estimated to have 8,000 miles of coastline and “some of the most beautiful pristine beaches in Europe, often with a backdrop of lush green forests and just a stone’s throw from an archaeological treasure. Many secluded beaches can be enjoyed by relaxed boat trips available from the resorts”..  So why do the b******s come here?!?!?  The beach at Agios Isodoros is less than 100 metres across 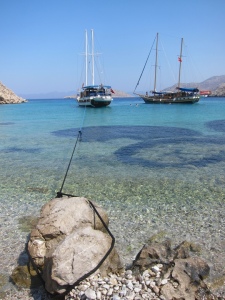 Turkish boats tied up to a rock on the beach

Looking back down to the bay from the ridge

I rather grumpily enjoyed a couple of swims, the water in the bay at Agios Isodoros being really pleasant.  Then I headed back up the hill and around the ridge via a broad ‘hidden valley’ to a ridge-top monastery, another swim from the beach at Nimborio before climbing over the shoulder of the hill to sit in the shady courtyard of yet another monastery. 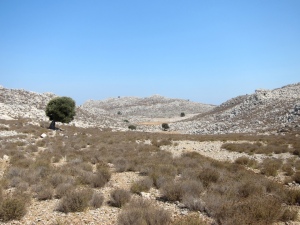 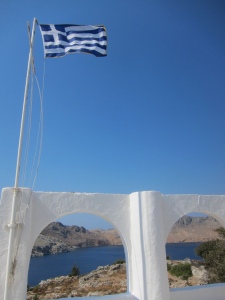 Altogether a very good walk.  Enjoyable paths.  Enjoyable views.  I love the mountains like this and the opportunity to swim in the Aegean is a privilege. And here and there the first of the Autumn squills are starting to push up out of their dried-up looking bulbs.  There is hope. 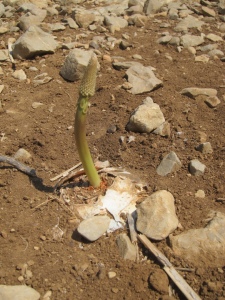 Squill pushing out into the arid world.

This entry was posted in Greece 2011, Grumpy Old Men. Bookmark the permalink.